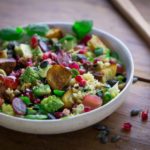 As well as bringing you recipes and some more informative posts, I thought it would be a nice idea to share a bit about my experience with vegan foods and lifestyle and some of my thoughts and how it made me feel. I wanted to start off by saying that although personally I am not vegan, I do love vegan foods and lots of my favourite restaurants are in fact vegan. A large portion of the recipes that I make are also vegetarian and vegan dishes, as well as lots of raw vegan desserts. About 9 months ago, I decided that I wanted to try out eating a plant based diet for a few weeks, just as a little challenge and experiment for myself to see how I got on.

Why I did this:

So, I wanted to briefly just start off with touching on why I decided to do this challenge in the first place. I love vegan food and it’s something that I’d been thinking about doing for a long time. I was actually inspired by a colleague at work at the time, who had come vegetarian and was also keen to incorporate more elements of the vegan diet into her lifestyle. I think it was after having a long discussion on the subject with her that I decided to just go for it! I love experimenting with nutrition and training, so was keen to see how it would effect my body and make me feel. It’s also something that I do think is a really good idea in terms of caring for the environment and also with the ethical aspects to it as well. I felt that there were a lot of positive factors to leading a vegan lifestyle and I was open to giving it a try. I didn’t want to put lots of pressure on myself and decide there an then that this was going to be a permanent change, so I know from the off that I was just going to try this as a monthly challenge and then see how I felt at the end before determining where I went from there. I think that was really important for me because something like this can be a pretty big lifestyle change, so you don’t want to put lots of pressure on yourself and feel down if you slip up or change your mind.

My first thoughts when entering into this were that I was a little apprehensive and perhaps even slightly nervous as to whether I would have enough variation in my foods and if I would actually enjoy what I was eating. I’m not a huge meat eater, but I do eat fish, eggs and some dairy products fairly regularly. I always have lots of sweet options lying around (being primarily a dessert blogger, sweet treats are never few and far between) but savoury was something that I was going to need to stock up on. I managed to get my boyfriend to join in the challenge with me too, so we went and stocked up on lots of fresh fruit, veggies and lentils and pulses for our protein sources.

I thought this topic would tie in quite nicely here and that’s food shopping and the cost side of things. I don’t know whether it actually ended up being a more cost effective option for me because all of the money that I saved on the regular food shop probably ended up being spent on extra vegan snacks and more luxury food items like raw chocolate. However, without all of these little extras, I would say that a vegan diet is probably more affordable as beans and pulses are a lot cheaper than meat and you can easily buy them dried in bulk bags, so they’ll last you a good while! The food shopping was also pretty easy, I could get most of what I needed to from my local supermarket and health store, so didn’t have to order anything special. Apart from fresh veggies and fruit, Inside Out sell pretty much everything you could possibly need, which was ideal for me!

I train in the gym on a regular basis, so I need to make sure that my diet supports this and that I’m getting sufficient protein to help repair my muscles. I would probably say that I did eat less protein whilst doing this, but I was still eating enough for my body size/weight. Including things like plant based protein powders were a big help in doing this, as they can be easily added into smoothies and porridges. My favourite one is the chocolate brown rice protein from Sunwarrior. Another food that became an absolute staple for getting my protein in was the Bean Pastas from Explore Asian. I love the edamame and black bean spaghetti because they taste great, are so easy to prepare and have an amazing protein content!

I wouldn’t say that I felt dramatically different straight away, but I didn’t have any negative side effects either. I felt satisfied with what I was eating, had enough energy to do everything that I wanted to and continue to train. After experiencing digestive issues in the past, this was another one of my concerns when switching things up with my diet, however luckily it didn’t seem to cause me any problems and I genuinely felt really healthy. A large part of my diet consisted of veggies and fruit, so it definitely helped me to get in my 5 a day! The only thing that I will say was that I did have to think about what I was eating a little more and insure that I was getting enough of everything that I needed. Saying that, I think that’s just because it was something new and over time it did become a lot easier!

This might seem like a little bit of a strange topic, but I think is something that can actually be quite heavily impacted by certain diets and ways of eating. However, this was definitely not one of them. There are loads of restaurants and shops that now offer vegan dishes and food options, so I didn’t find this part of the challenge to be difficult at all. There’s also a absolutely amazing range of vegan snacks and treats now on the market including protein bars, crisps and raw chocolate.. so snacking was certainly not an issue there! I think it’s quite a common misconception that a vegan lifestyle is very restrictive and will mean having to miss out on things, but this honestly couldn’t be more un-true and I found that I actually experimented more with my food whilst living this way! Having my boyfriend join me on the challenge was a big help, as it meant that we could support each other and prepare our meals together- so I can’t comment on how I would find it still living at home with my family etc.

So, how did I get on? Well, I actually stopped the challenge after 3 weeks, so I didn’t quite stick to it for the month. However, I am pretty proud of myself for completing those 3 weeks and overall I’m really glad that I chose to do this and think it was an educational and positive experience for me. I chose to finish the challenge slightly early just because I found myself craving certain foods and I just felt that that would be the right decision for me. I didn’t want to feel like I was restricting myself from anything or that I was on a ‘diet’ as I don’t think that it’s a healthy midst to be in. For me personally, I feel that I function best with an omnivorous diet, but that is just ME and could definitely change in the future. I do incorporate lots of vegan meals into my diet today and thoroughly enjoy them, and I am certainly open to trying out this lifestyle again in the future.